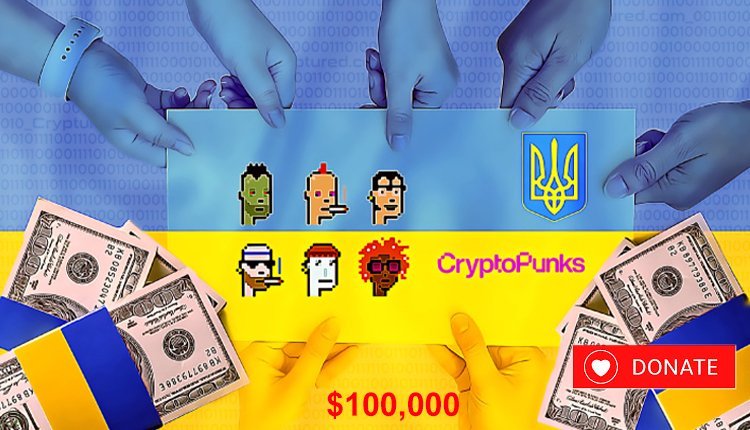 Aid for Ukraine raises over $100,000 by selling donated Cryptopunk NFT.

The government of Ukraine has raised over $100,000 to support its war efforts against Russia by selling a donated Cryptopunk NFT via its Aid for Ukraine crypto fundraising campaign.

The non-fungible token Cryptopunk #5364 was donated to the fund in March and it was sold to an anonymous buyer yesterday for 90 ETH. The Ukrainian Deputy Minister of Digital Transformation Alex Bornyakov announced the sale of the NFT in a tweet. He said the crypto community continues to support Ukraine. The war-hit country has been accepting crypto donations since late February 2022. It has reportedly raised over $135 million in crypto through donations in various cryptocurrencies and sales of donated NFTs.

A crypto group raised $6.75 million, in early March, for Ukraine’s war effort. This feat was achieved through the sale of a single NFT of the Ukrainian flag. Then Kalush Orchestra, a Ukrainian rap group that is 2022’s Eurovision champions, auctioned their trophy from the music competition. The group managed to raise around $1 million in ETH.

The crypto fund “Aid for Ukraine” helps purchase non-lethal weapons, such as bulletproof vests and medical supplies, etc., for the Ukrainian army. The Ukrainian government doesn’t hold or spend the funds. It only endorses and oversees the project. Kuna, a Ukrainian crypto exchange, operates the fund’s treasury.

Crypto donations for Ukraine’s cause have also drawn criticism. The foremost argument is that crypto and NFT donations are not immune to the current bear market. High volatility affects the fundraising potential of NFT collections like Cryptopunks, which is built on the Ethereum blockchain.

Ukraine has become a member of the European Blockchain Partnership as an observer.

An example of a DAO for a bank or financial institution.