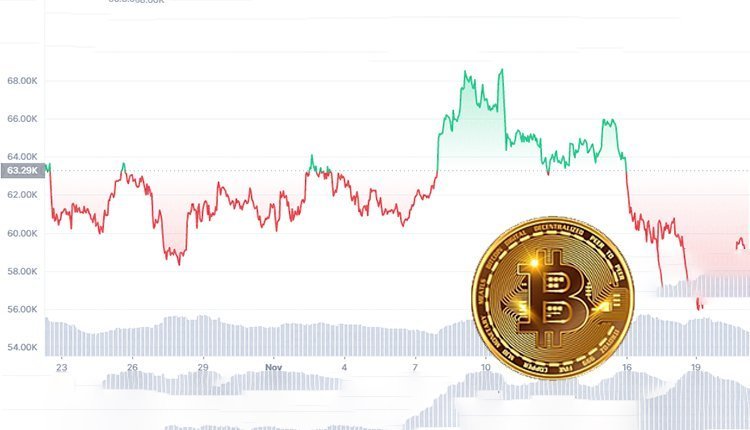 Bitcoin May Have Seen Its Local Lowest at $56.5K

Bitcoin (BTC) investment involves being ready to surprises in its price fluctuations. In one year alone, it has gone up higher than 20 percent of its prevailing price on five occasions. It has seen 18 percent lowering on five intraday events. Compared to the volatile fluctuations seen in its prices, it has faced only modest fluctuations in recent times. This level of fluctuation is expected in this cryptocurrency. Traders whether they are multi-million dollar fund managing companies or small investors have been surprised by its 19 percent correction even when it has achieved a high. The surprise is that its recent correction of $13,360 was over nine days from its maximum high of $69,000 seen on November 10.

Highly fluctuating prices are well known to the cryptocurrency traders. Almost $600 million Bitcoin future contracts have been liquidated in last four days. While it looks a decent number, it should be noted that it is not even 2 percent of Bitcoin futures market. The 19 percent low indicates the maximum it can go down. This drop is due to the liquidation events even when it was seeing sharp price moves. If buyers’ leverage was working, there would have been a sharp change in the open interest, similar to what happened on September 7.

Crypto traders must check its 25 percent delta skew. It indicates the greed and fear sentiments when comparing put and call options. It is going to become positive when put premiums go higher than the call premiums with similar risks. It is termed a downfall scenario while an opposite trend indicates greed of the traders.

These fluctuations indicate BTC’s resilience when faced with its recent price drop. While this cryptocurrency’s price can go to any levels of high and low, derivatives data indicate its $56,000 price may be the local bottom it has seen.

Cryptomeria Labs Valuation Stands at $17M with Recent Funding Round