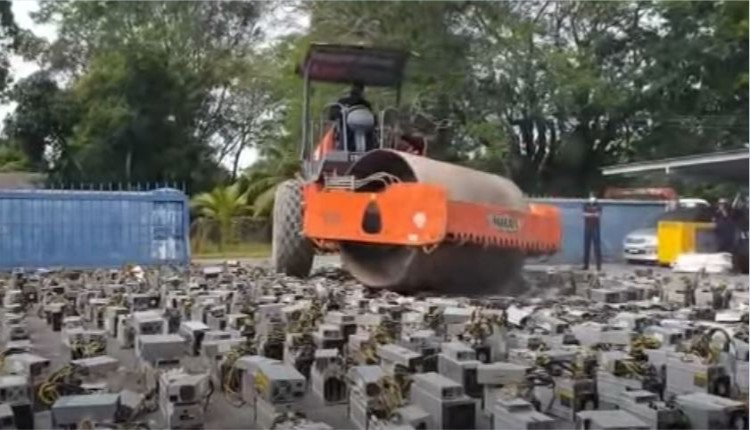 Bitcoin Mining Rigs Destroyed by Malaysian Police – But Why?

The Malaysian police force was very recently in the news for destroying more than 1,000 bitcoin mining rigs. The total worth of all the rigs is estimated to have been around $1.25 million. After using a steamroller to destroy the rigs, the Malaysian police revealed that the act was retaliation against bitcoin miners who stole electricity worth $2 million for powering the rigs.

According to a Malaysian National News Agency report, the Malaysian police conducted the operation in combination with Sarawak Energy, an electric utility company. ACP Hakemal Hawari, the police chief of Miri (the Malaysian city where the police carried out the operation), said that the six individuals were arrested for electricity theft. The accused are facing jail time up to eight months and have also been fined around $2,000.

The rising electricity theft incidents by bitcoin miners in recent years have contributed to frequent power outages throughout Malaysia. Cryptocurrency mining is no stranger to criticism, as the activity has been frequently targeted for its high electricity consumption. Many critics also believe that the growing popularity of cryptocurrency mining is adding to the problems that have been already created by global warming and climate change.

The incident in Miri came to the fore after videos of the operation emerged on social media and soon went viral. It’s one of the latest incidents that highlight electricity theft problems arising from illegal crypto mining operations. The problems have become even bigger since bitcoin’s price skyrocketed to over $60,000 per coin earlier in 2021. At the time of the Miri operation, a bitcoin was worth almost $31,000.

What Is Bitcoin (BTC) And How Does It Work?