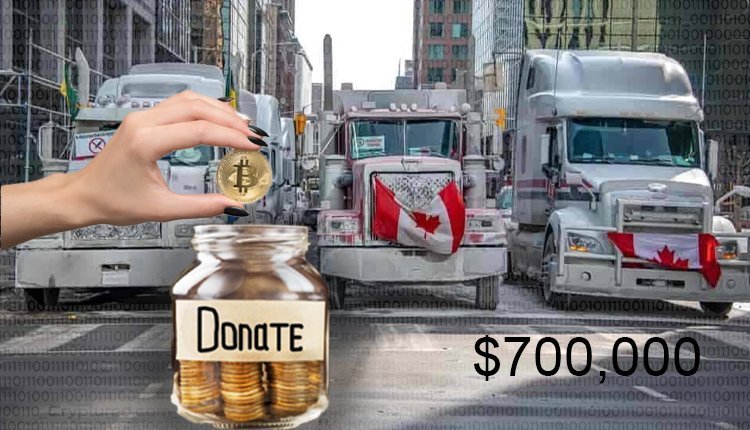 Canadian truckers raise $700,000 worth of bitcoin in donations

After their GoFundMe donations were blocked, Canadian truckers Freedom Convoy have raised nearly $700,000 worth of bitcoin from more than 4,000 donors. The group has also gained Tesla CEO Elon Musk’s support. The billionaire had tweeted “Canadian truckers rule” in late January.

They are protesting about nationwide COVID-19 vaccination mandates on truckers re-entering Canada from the United States. Now, the group wants an end to all COVID-19 health restrictions.

To stem the protest, the law enforcement took the GoFundMe platform into confidence to block the $10 million in donations, which was initially directed toward the convoy’s organizers. This caught the attention of some bitcoiners in Canada who are opposing COVID restrictions as well as financial censorship.

As such, BTC Sessions – a crypto YouTuber from Calgary kick-started a fundraiser for the truckers’ movement using the popular crypto native crowdfunding platform Tallycoin. With bitcoin being a peer-to-peer network, government finds it difficult to prevent users from sending money for such causes.

Jesse Powell, the CEO of Kraken exchange, is one of the donors. He said fix the money, fix the world. Powell highlighted that mandates are immoral and end the madness with a HONK, HONK! The funds are directed toward a multisig wallet which is controlled by BTC Sessions, Greg Foss (bitcoiner), Francis Pouliot (CEO of Bull Bitcoin), and author Jeff Booth. The multisig (multi-signature) wallet needs the authorization of multiple parties before the funds can be used.

Nobody Caribou, the fifth signer and the negotiator between bitcoiners and the protest organizers, said the funds would be used to supply the truckers with diesel and water. The funds would also be used as a legal defense fund.

The Axie Infinity token AXS has increased by 40%.