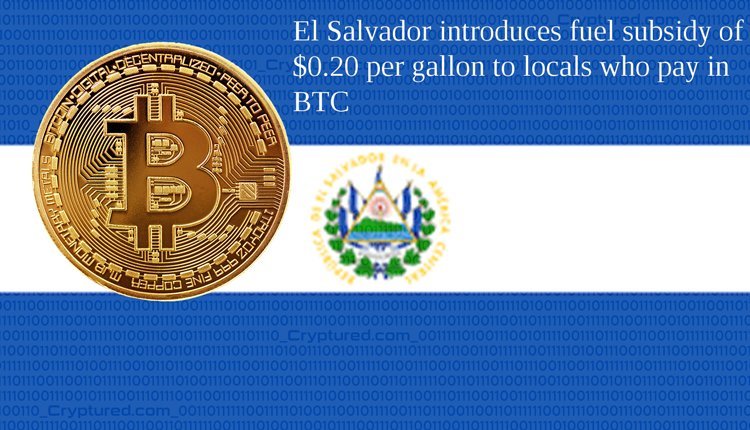 El Salvador’s fuel stations will give a subsidy of 20 cents a gallon for citizens who pay in Bitcoins (BTC). This subsidy deal has been active since October 1, 2021.

Navid Bukele, the President of El Salvador, announced that Chivo, the state company, has negotiated a deal with the nation’s largest fuel stations. According to this negotiation, the gas stations will give a special subsidy to people who pay using Chivo Bitcoin Wallet. The news seems to be a positive one for the wallets of Salvadorans.

El Salvador is the world’s first nation to give an authorized tender status to this cryptocurrency. The present initiative taken by the government is to encourage the use of BTC among the locals. This deletes many hikes in the global fuel price.

Bukele underlined that there is no restriction to the gas subsidy applicability. The local companies, as well as residents, are eligible to avail of this discount. The President is hoping to see a considerable decrease in transportation expenses as a benefit of this government program.

He disclosed that he had approved a fund for stabilizing the domestic price of liquefied gas. He asserted that the global market had proposed a hike of $1.17 in the cost of a liquefied gas cylinder (25-pound), while the citizens of El Salvador will enjoy a slight cost reduction. Further, he said that during this period, the country would also pass on any drops in international gas prices to consumers.

While some residents were not convinced that the discount would be beneficial for the public, others were doubtful of the President’s decision to provide this subsidy only to people who pay through Chivo.

KuCoin advises Chinese users to transfer funds to “other platforms” before the end of the year.