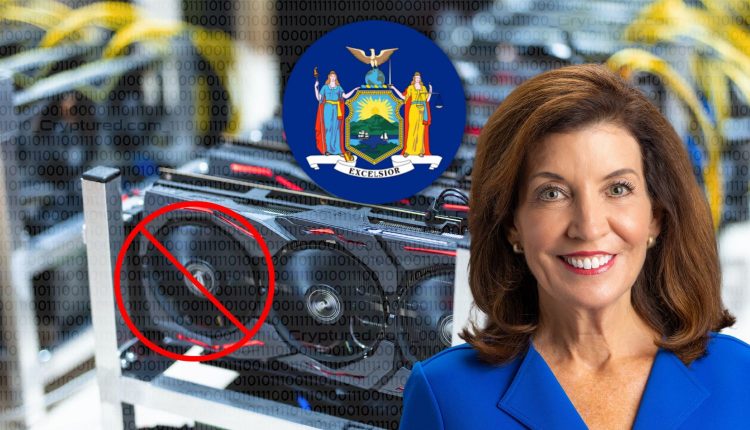 New York Governor Kathy Hochul has banned Bitcoin mining operations that run on carbon-based power sources. Companies for the next two years will not be allowed to expand or renew permits unless they turn to 100% renewable energy.

Hochul described the ban as the first of its kind in the country. She said it was important for New York as it looks to curb its carbon footprint. The state is moving forward by cracking down on mines that use electricity from power plants that burn fossil fuels. New York’s mining law was passed in late April. But the state senate called for a two-year moratorium in June on certain crypto mining operations which use proof-of-work (PoW) authentication methods to validate blockchain transactions.

Now with the ban in place, industry insiders fear a domino effect across the United States. The Chamber of Digital Commerce said the new law will set a dangerous precedent in determining who may or may not use power in New York State. Kevin Zhang, senior vice president of Foundry, said it means New York is closed for business to Bitcoin miners. He pointed out that it also singles out a particular industry to ban from energy usage.

Perianne Boring of the Chamber of Digital Commerce believes this would weaken New York’s economy and force businesses to take jobs elsewhere. She feels this is a significant setback for New York. The ban will stifle the state’s future as a leader in technology and global financial services. Boring said the decision will eliminate critical union jobs and disenfranchise financial access to the many underbanked populations.

Moreover, the executive outlined that proof-of-work mining has the potential to lead the global transition to more sustainable energy. She said the Bitcoin mining industry is actually leading in terms of compliance with the Act.