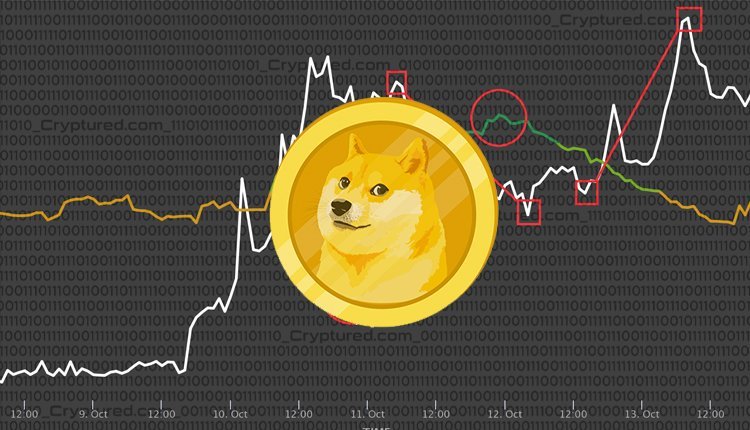 A crypto bull run is much desired. But every such green run is soon followed by a sideways or downward move. Experienced traders understand that such market periods can turn into good profits. Being able to anticipate the market ups and downs helps lock in profits or allow people to exit or even move to short crypto assets.

VORTECS looks through years of historical data on market and social conditions. It then evaluates a possible rise or fall in the market.

A crypto token’s high VORTECS score indicates a bullish outlook. A score below 30 indicates a possible drop in price.

Typically, red scores are rarer than dark-green ones. Red scores are indicated when crypto-assets see flash rallies. At such times assets get overbought, and this is soon followed by a large correction.

Such an instance occurred with DOGE. In April, the VORTECS score went past 80 following several celebrity tweets raising the trading volume. But, sooner than 12 hours later, the price fell down to $0.141.

In this case, before the price reached its peak, the algorithm indicated that historically DOGE’s rises were soon followed by falls. The VORTECS scores do not tell investors when to go short or long. They inform traders of the historical trends based on which they can make their trading strategy.

A similar instance was also observed with COTI in August this year and with NEAR in September.

In April, NMR witnessed a price high of $78.07 and its VORTECS score dropped under 30. Soon enough, correction occurred, and NMR’s price fell to $63.00.

In Oct, STX saw a strong rise from $1.44 to $2.99. Subsequently, its price started to fall. The fall continued before finally settling at $1.86. However, during the fall, the VORTECS score again rose sharply to 88 based on historical data. Not surprisingly, STX’s price again rose past its previous high to settle at $2.39.

BTC or ETH: Which One Provides Better Protection from Inflation?