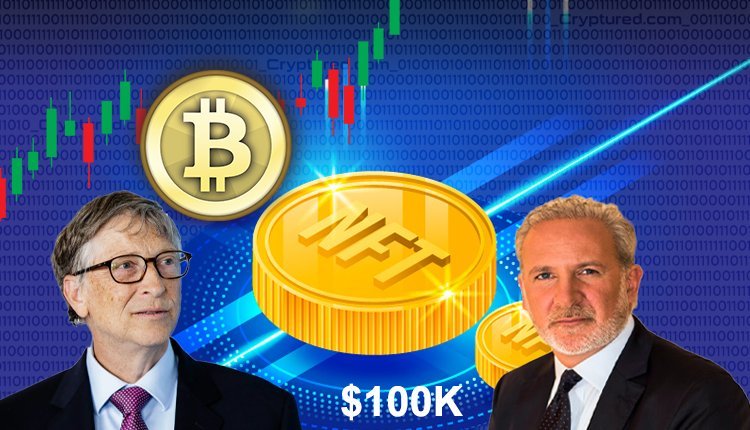 Predictions for $100K in Bitcoin, according to Peter Schiff NFTs are being slammed by Bill Gates.

It is no wonder that the last week has seen polarized opinions on crypto and other issues. Whether it is the prediction that BTC will touch $100K by the end of 2022 or Peter Schiff saying that recession will get worse, everyone wants to weigh in.

A survey/study conducted by a well-known financial services giant indicates that many crypto managers think that BTC prices will go up. The US Federal Reserve has hiked its interest rates by 75 basis points, which is the highest in close to 20 years. According to sources, the Feds are expected to raise interest rates by 1.5 points more by the end of 2022.

And in the middle of all this, Peter Schiff, a well-known and highly regarded economist chipped in with his opinion. He made dire predictions on crypto and how he expects them to lose value. Schiff is convinced that more investors will sell their BTC holdings to pay for their daily expenses. He also thinks that the recession will get worse.

Bill Gates, Microsoft co-founder also waded into the fray by saying that he would never invest in crypto, as it is an asset based on the fool theory. He also mocked the interest in Bored Ape’s NFT offerings by saying that images of monkeys would improve the world tremendously. Gates made this statement at a Techcrunch conference on Tuesday, June 14th. According to Gates, his efforts to support digital banking via philanthropy are much more efficient than crypto.

Africa’s Low Crypto and Blockchain Adoption Driven Me to Write a Book.