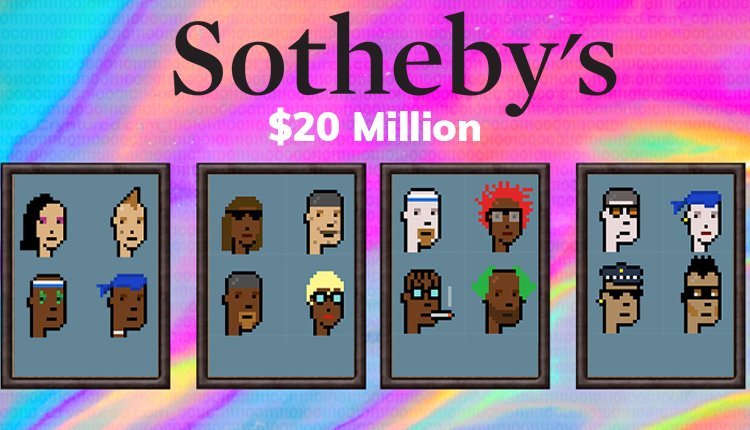 On Feb. 8, 2022, the luxury auction company Sotheby’s announced the desire to auction a lot of 104 NFTs. Being a part of the Ethereum blockchain, cryptopunks were one of the first Non-Fungible Tokens (NFT) in the crypto marketplace.

The price of this actionable lot is expected to fetch $20 to $30 million. Larva labs had launched 10,000 uniquely generated characters known as cryptopunks in June 2017. Since they are very rare, many collectors are expected to bid for them.

The auction will take place on Feb. 23, 2022. The original lot was purchased in July 2021 by a buyer who had disclosed it on Twitter. He had bought it for $7 million and it is believed that this lot of 104 cryptopunks had increased the price of this NFT in the crypto market.

Sotheby’s have dealt with NFTs in the past. Multiple digital artists had created Cryptopunk #7523. Sotheby’s got $11.8 million for the sale of this lot. Today the floor price of one cryptopunk unit is around $200,000 and hence the calculation of at least $20 million for 104 units is absolutely logical.

In June 2021, CryptoPunk 9998 was sold for $558 million. In that event, the buyer and the seller were the same, and some of the journalists feel that it was just a publicity stunt.

When the crypto was initially launched there were 6,039 male and 3,840 female characters were created. None of them are similar to the other, and these initial 10,000 characters could be claimed by anyone who had an Ethereum wallet. So out of these ten thousand characters, most are humans and 88 zombies, 24 apes, and 9 aliens.