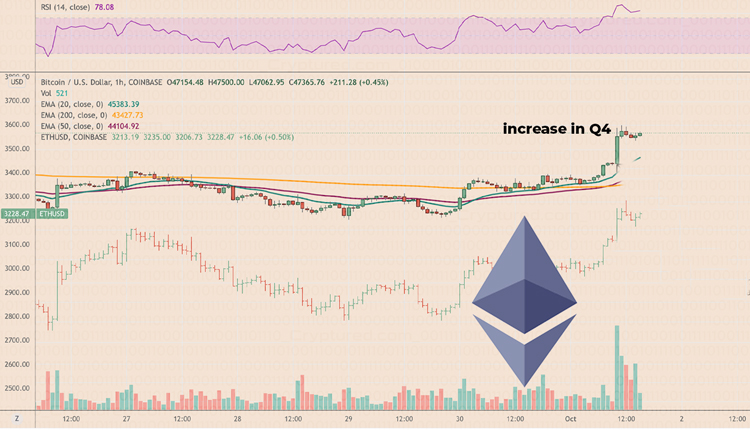 There are three bullish factors that could trigger the price of Ethereum to a hundred percent increase in the fourth quarter. On October 1, the value of Ether increased by more than 9 percent and crossed the $3,000 mark for the first time in ten days.

ETH (Ether), the native token of Ethereum is showing the possibility to double its market value in the next few months, according to some positive and supportive fundamental and technical indicators.

Ether saw a price gain along with an increase in market valuation of the major digital currencies including BTC (Bitcoin). The latter saw a 9.5 percent surge hitting the $48,000 mark, its highest point in 10 days. Here are the three factors that could increase Ether’s price to double its current value:

1. A mix of higher demand and lower supply

A mix of these two serves as a bullish element for the increasing price of Ethereum.

2. Correlation of Bitcoin and Ether against increasing inflation in the United States

The boom in the crypto market on October 1 coincided with a report released by the US Commerce Department in consumer spending. Many speculators treat BTC as a hedge against increasing inflation. That explains the latest response of the benchmark digital currency to the increasing consumer prices in America.

According to data shared by CryptoWatch, the 30-day average correlation between Ether and Bitcoin is close to 0.80. This led to the price surge of Ether alongside Bitcoin.

Ether had gone through a hard fork upgrade on August 5. This network hard fork further increased its bullish outlook courtesy of the age-old law of demand & supply.

The drop in the reserves of ETH demonstrates that traders are likely to hold their tokens instead of selling them for other assets. That’s because there could be a squeeze in supply for investors interested to enter the Ethereum market, making it more valuable.

Cudos, a gold sponsor, will deliver a keynote address at the CryptoAM Blockchain & DeFi summit