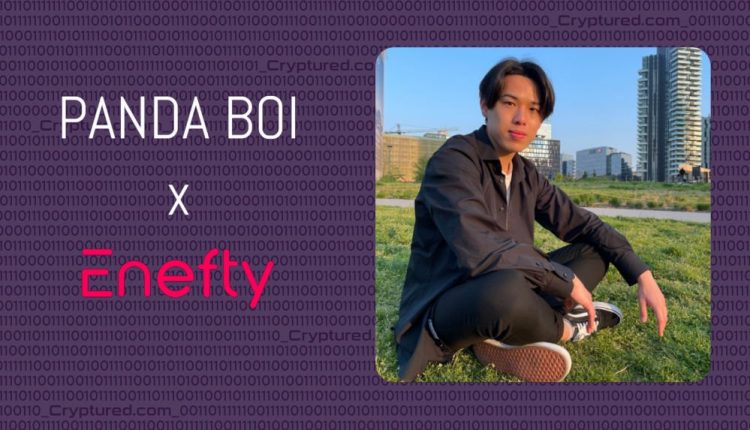 TikToker and YouTuber Panda Boi teams up with a Berlin-based startup Enefty for a special NFT drop.

A popular TikToker and YouTuber Panda Boi teams up with a Berlin-based startup Enefty for a special NFT drop. Parts of the proceedings to go to a charity.

The non-fungible tokens or so-called NFTs already have made headlines multiple times this year for several high selling prices. Beeple selling his digital artwork for $69 million, the former Twitter CEO Jack Dorsey collecting 2 Million for his very first tweet and the ‘Charlie bit me’ viral video selling for about $760 000 are the examples that will be remembered well. Recently NFT was even picked as a word of the year by Collins Dictionary. Some think this is just hype, while others believe this could be the holy grail for the creators to give them even more control over their content and engage fans.

A popular YouTuber and TikToker Panda boi, who has over 12 Million total followers on his channels is planning to join the trend by announcing his exclusive NFT drop on the Berlin-based NFT platform Enefty. The auction will go live on the 23rd of December and run till the 27th. People will be able to make bids in Ether through a Metamask wallet. The NFT will feature a special 1 of 1 unreleased video from the creator, that hasn’t been published on any of his channels yet. The winner will also get a chance to pick a special perk such as an AMA session with the creator. The 5% of the proceedings will be used to donate to a charity.

Panda Boi is based in Milan Italy and started creating short videos at the end of 2020 with the primary goal of making people smile. Soon after, his content exploded and he went viral several times. His most viewed video on YouTube counts over 150 Million views and it looks like fans are quite excited for the upcoming NFT already.

“NFTs are quite a new trend, that’s why I’ve created a poll in my YouTube community area to gauge the interest from my fans. The feedback was very positive. Over 150 000 people took part in the poll in a few days and 73% of them showed interest in NFTs, I’m happy to partner up with the Enefty team and super excited about the outcome” – said Panda Boi.

Enefty, the partner in this NFT drop, is building a marketplace dedicated for video creators, like YouTubers and their fans to buy, sell and trade video content as NFTs. The platform has already run a few single auctions with selected creators with a grand vision to bring the NFT technology closer to the creators and their fans. The last auction on the platform recently was sold to nearly $5000.

“This partnership is very exciting for us as the Panda Boi’s content is super engaging to millions of people and owning such exclusive unreleased content from such a prominent creator would be a no brainer for any fan”- says the co-founder Giorgi who leads the business development and marketing of the company. “We are happy to be able to play our role in this by providing technology for creating a decentralized video NFT while offsetting all the CO2 footprint produced from the auction to make sure it has no negative impact on the environment”.

After the auction ends a part of the proceedings will go to charity. The creator picked India Development and Relief Fund, Inc. (IDRF). “We planned my first NFT drop around Christmas because this is such a special time of the year for a lot of people. I want to give my fans an opportunity to get something special, to support me and also others by getting this exclusive NFT” said Panda Boi.

Bitcoin is a free and open currency, but it is not progressive