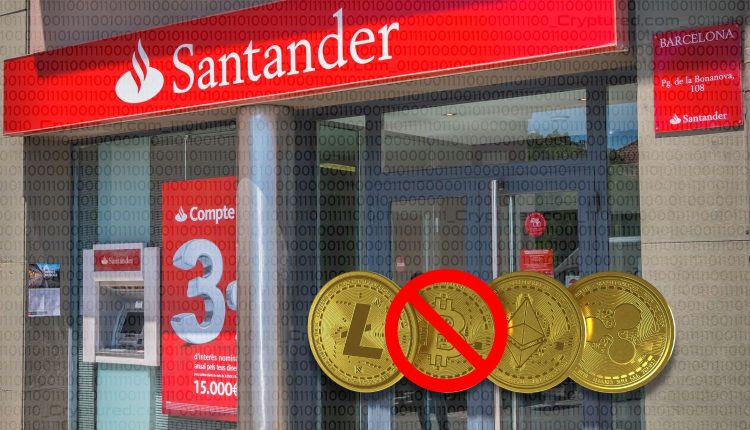 According to an announcement in November, the bank intends to protect its customers from risks associated with crypto investments. stating, “if something goes wrong, money held in clients’ crypto wallets is unlikely to be covered by the Financial Ombudsman Service and Financial Services Compensation Scheme.”

Santander UK claimed to be protecting its consumers from risks associated with cryptocurrencies by limiting the number of money clients may send to exchanges, saying that doing so is the “best approach to make sure your money stays safe.”

Despite the new imposition by the bank, customers will still be allowed to receive salaries from cryptocurrency firms in their bank accounts. The announcement was not positive gratitude by some investors, some of them criticized the action taken by the bank. This made a rise of concern in the crypto space, especially on Twitter especially Layah Heilpern said, “Remember, they only ban what threatens them. If this isn’t your signal to buy, I don’t know what is.”

Another user by the name Alesxius asked, “Since when do they have the right to tell you what you can and cannot do with your own money?” Following Barclays’ lead, Santander’s U.K. banks have forbidden their clients from sending payments to Binance, citing warnings from the Financial Conduct Authority.

For the past few days, the UK has mostly been against the cryptocurrency sector, but there are indications that the trend may soon change. Changes at the highest levels and Rishi Sunak’s appointment as PM are the key factors driving this. He has already sided with the sector and stated that the UK needs to enact suitable legislation regarding bitcoin operations.

The Financial Conduct Authority, a UK financial regulator, has frequently issued advisories on the dangers and frauds that exist in the cryptocurrency sector. A formal regulatory framework for digital assets has not yet been implemented in the nation, and the banks are still showing off their strength.