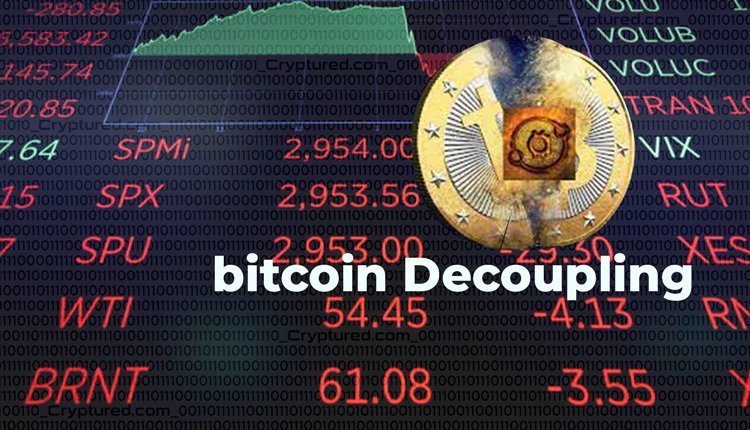 What Decoupling Of Stocks and Bitcoin Means

With cryptography, the risk of investors getting fooled by randomness has increased. Traditional investors believe that they are struggling to understand the role of cryptocurrencies in the financial markets. However, the class of digital assets believes otherwise.

Some analysts believe that stocks and bitcoins are on the same path. By separating stocks and bitcoins, it could revive the promise made by cryptocurrency supporters that when stocks sell out during tough times, cryptocurrency will support the investment portfolio. It is a hedge that will protect your investment. Many people are worried that during times of accelerating inflation and ultra-low yields, one cannot rely on government bonds.

It’s because of cryptography, its highly speculative nature, and the unexplained volatility associated with it which makes people hesitant to use cryptocurrency and turn it into an acceptable and trustworthy relationship with the traditional assets. Apart from this, some of the lawmakers in the United States have made some favorable comments regarding cryptocurrency. Also, with many big-money investors making large purchases in cryptocurrency, people are now starting to realize its credibility.

There is also an obvious reason behind Bitcoin getting decoupled from equities in October, which is that it is getting pumped increasingly. True believers use the term ‘Uptober’ on social media as they cry about the gains they made this month. According to the chief strategist at the Interactive Brokers, Steve Sosnick, this latest increase can be because of the frenzy related to meme stocks like AMC Entertainment Holdings Inc. and GameStop Corp, which has been fueled by social media campaigns.

The application of XRP holders to join the SEC against Ripple case as defendants was denied by the judge.